From the point of view of own planet, the Sun and the Moon appear to be about the same size. This is because the Sun is four hundred times larger than the Moon, but also about four hundred times the distance from Earth. From earliest times this has exerted a strong psychological relationship to the two luminaries, encouraging the belief that they are of equal but different importance. The Sun may be the source of all energies, but it is the Moon that determines the tides and has the most immediate effect on our moods and earthly activities. The Moon in astrological practise is therefore of great significance. In fact, in most systems, she is given much more importance than the current frenzy for Sun sign astrology would imply! The Moon’s Nodes are not planets. They are points in space indicating the intersection of two orbits.

The elements to be considered are a) the Ecliptic, the apparent path of the Sun around the Earth, which is actually the orbit of the Earth around the Sun; and b) the orbit of the Moon that which revolves around the Earth. The planes of these two orbits intersect each other at 5 degrees, 8 minutes and 40 seconds. The line of intersection is the axis formed by the Moon’s Nodes. (See Rupert, Cycles of Becoming: The Planetary Pattern of Growth. 1978 p.54). The Nodes do not move at an entirely predictable speed and vary from day to day.

They are either calculated as “True” or “Mean.” True is the ‘ exact’ position of the Nodes at any given time, while Mean is the presumed position based on the average speed. With the assistance of computers, most astrologers have opted to use the True Node, but the matter of which is more eloquent is still debated. The Mean Node is always retrograde, whilst the True Node may occasionally be direct as if it’s wobbling. That’s because the True Node takes the gyroscopic relationship of the Sun/Moon into account. It may be argued, then, that it now makes little sense to use the Mean Node when it is just as easy to calculate the True Node. However, this is somewhat illusory: Since “in the strict sense of the word, even the ”true” nodes are true only twice a month, viz. at the times when the moon crosses the ecliptic. Positions given for the times in between those two points are just a hypothesis. They are founded on the idea that celestial orbits can be approximated by elliptical elements. This works well with the planets, but not with the moon, because its orbit is strongly perturbed by the sun.

Another procedure, which might be more reasonable, would be to interpolate between the true node passages. The monthly oscillation of the node would be suppressed, and the maximum deviation from the conventional ”true” node would be about 20 arc minutes” See the Swiss Ephemeris for further explanation. I would, therefore, recommend experimenting with both systems. An obvious advantage of using the Mean Node is that it is what was used traditionally, so most commentaries of the meanings will have used this method. The North and South Nodes of the Moon are also known in Vedic astrology as Rahu and Ketu respectively. The North Node is considered as the head of the dragon, while the south is considered to be the tail. In Vedic astrology, the Nodes are considered malefic, with Rahu being comparable to Saturn as Ketu is to Mars. But this is true only as a loose planetary analogy, as “Ketu when inauspiciously placed, can ruin significations in an uncommonly awful and devious way. Whereas Rahu disturbs by way of lethargy, grossness and insensitivity: it does so in a manner that is much less intense and purposeful (Braha, James T. Ancient Hindu Astrology 1986. p.34).

The fascinating myth of Rahu and Ketu is told in the Mahabharata. The Hindu gods wanted to generate soma, an elixir of immortality. The idea was that the gods were to drink the elixir and become immortal. This was not an easy task, so the gods asked for help from the demons to stir the oceans to produce the elixir. Out of this churning ocean the Sun, Moon, goddesses, and magical things were produced together with the soma. Vishnu took charge of distributing the freshly made soma to the gods. However while the soma was being passed out, the demons began to battle with the gods for a taste of the elixir. There was much confusion and Rahu, one of the demons, disguised himself as a god and drank some of the elixir. The Sun and Moon recognized the imposter and advised Vishnu. As Rahu was swallowing the soma, Vishnu sliced off his head with a sword. However, because the soma had passed into the throat the head had already become immortal. To avenge the Sun and Moon, Rahu chased the Sun and Moon across the sky and tried to eat them, occasionally catching and swallows one of them. This caused an eclipse, but when the victims fell out of Rahu’s mouth, the eclipse ends.

We do know that the Nodes are an important element in predicting eclipses of the Sun or Moon. NASA ‘” confirms that eclipses only occur if the satellite of a planet is located within 0.5 degrees of the plane of the Ecliptic, on a line which passes through the centre of the Sun and the Earth. The Moon travels along an orbit which is inclined by 5 degrees to the Ecliptic plane, so there are only two opportunities each month when it passes through the plane of the Ecliptic, called the ascending and descending nodes. These two points connected to the barycentre of the Earth-Moon system ( roughly the centre of the Earth ) define a ‘line of nodes’, and eclipses of the Sun and Moon will occur if this line of nodes coincides with the line drawn between the centre of the Earth and Sun. Again, the Moon also has to be within 0.5 degrees of one or the other of the nodes so that the disk of the Sun is partially or totally covered in a solar eclipse. A similar argument explains why lunar eclipses do not happen every full moon at the node opposite the Sun from the Earth.” See NASA for more information. 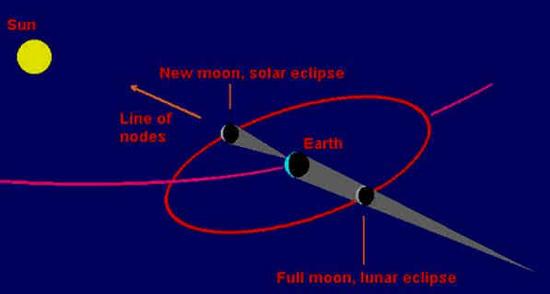 The image above shows the conditions necessary for an eclipse. Note that the North Node is pointing to the Sun. Modern Western astrologers do not tend to see the Nodes in the same light as either Vedic or Traditional Western astrologers and have invented some very exotic meanings without much coherent rationale. Often they take the politically correct route, suggesting nothing can be wrathful or malefic in the ‘New Age’ and that the very idea of ‘malefic’ belongs to a less ‘enlightened’ age. There are many who consider the nodes as essentially karmic signatures, but then become surprisingly vague or aggressively retributional and dogmatic. In the case of the latter, I’m thinking of the ‘tone’ of much of Schulman’s work on the subject.

joyned with good Planets, and good when in conjunction with the malignant Planets. This is the constant opinion of all the Ancients, but upon what reason grounded I know not; I ever found the North Node equivalent to either of the Fortunes, and when joyned with the evil Planets to lessen their malevolent signification; when joyned with the good to increase the good promised by them: For the Tayle of the Dragon, I always in my practise found when he was joyned with the evil Planets; their malice or the evil intended thereby was doubled and trebled, or extreamly augmented, &c. and when he chanced to be conjunction with any of the Fortunes who were significators in the question, though the matter by the principal significator was fairely promised, and likely to be perfected in a smal time; yet did there ever fal out many rubs and disturbances, much wrangling and great controversie, that the businesse was many times given over for desperate ere a perfect conclusion could be had; and unlesse the principal significators were Angular and wel fortified with essential dignities, many times unexpectedly the whole matter came to nothing.” (CA. I. 82)

I don’t know why Lilly suggests that “it’s the constant opinion of the ancients because it isn’t.” Nevertheless his own position is clear.

Consider this : “the original meaning of the Sanskrit word ketu is “light,” “clarity”
(synonymous with the etymologically related adjective citra of the Pahl. gōchihr), which is in apparent contradistinction to the light-devouring function of Ketu as eclipse demon.” ( Dragon in Medieval East Christian and Islamic Art.(2011)  Sara Kuehn p. 144. Significance becomes highly complex :

The esoteric conceptualisation of the dragon
is illuminated in the allegory of a hero’s spiri-
tual journey in A Tale of Occidental Exile written
by the mystic Shihāb al-Dīn yaḥyā Suhravardī :

If you desire to be delivered along with your
brother [i e , speculative reason, the guide (ʿāṣim)],
do not put off traveling Cling to your rope, which
is the dragon’s tail (jawzahr) of the holy sphere
that dominates the regions of the lunar eclipse
[the realms of the eclipse denoting the world of
ascetic practice]

The hero passes beyond the material world and
reaches a light, the active intellect, which is the
governor of this world He places the light in the
mouth of the dragon, the world of the elements,
that “dwelt in the tower of the water-wheel [i e ,
the sky which turns like a wheel], beneath which
was the Sea of Clysma [i e , the water below the
sky] and above which are the stars the origin of
whose rays was known only to the Creator and
those “who are well-grounded in knowledge ””

This is fascinating material; but for all practical purposes, it restates the words of the Buddha: astrology no longer applies to those who are enlightened.

I have changed my view more than once over the years. I have read everything I could get my hands on regarding Traditional Astrology. There is no consensus but I’m giving the last word to Al Biruni. He is discussing the relative conditions of the luminaries:

“When both the luminaries are in aspect to each other, and to the benefics, and are in their own sections of the signs of the benefics, both of them are strong. But if they are in situations unsuitable to them, and the malefics, full of enmity are above them, and the benefics below, or are eclipsed, or near the dragon’s head or tail, especially the latter by less than 12 degrees, both of them are weak.” (Instructions p. 110.)

Elswhere he writes: “Some say the Head of the Dragon is Male and Diurnal and the Tail Female and Diurnal, but this is quite illogical.” (Instructions p.  27- 28 ) He then proceeds to explain the many ways any element of the chart can be changed by its relation to other elements.

Neither statements are dogmatic. In fact, it’s quite nuanced. But the nodes needing to be less than 12 degrees in either direction speaks volumes. There are conditions that can ameliorate the influence but that doesn’t stop the nodes from being the ‘light eating monster’ when unrestrained by a number of balancing factors. Clearly, he isn’t making much of distinction here between the head or the tail.

I have found this approach to be most useful and accurate. This work as well in the Judgment of Nativities as they do for Electional and Mundane. The nodes have a special place in the astrology of vulcanology as I hope to demonstrate in a future article.

10 thoughts on “Head and Tail of the Dragon : The Lunar Nodes”