I have been hesitant to write on this topic for more than one reason. First and foremost I have no love of sensationalism,  I do have a  concern for all who have been hurt and  also needed to meditate on how Hellenistic astrology can best address this kind of event. What follows is a few thoughts on the incident.

Before I begin, I would like to convey my most sincere condolences to the families and friends of passengers of Malaysia Airlines Flight MH370. This has been one of the most bizarre stories I’ve heard in recent times.

We have a state of the art plane, from a highly reputable airline, with an experienced pilot and co-pilot, vanishing while the world employs every imaginable form of surveillance, from satellites, radar and ship and planes from several countries. The depth of the water was less than the length of the plane

The weather was clement and the pilot gave the customary “good night” to Air Traffic Control as it flew towards Vietnam The perimeters of the search have been extended as far as the southern Indian Ocean, thousands of miles and in the opposite direction of the scheduled flight.

The flight departed at 0:41 am – 8 AWST (local time) on 08 March 2004 from Kuala Lumpur. The destination was Beijing and the majority of passengers were Chinese nationals. This happened three weeks ago and the media is claiming that all resources employed have yielded no results. The official line is that the plane lost contact as it flew towards the South China Sea

There have been reports from fishermen that a  ball of fire fell into the ocean which they identified as an airplane. This occurred at the time the plane would be expected to be in that location. Considering that oil slicks were also seen and documented in that area, it seems very odd that this area was not given top priority as a search site. Indeed, several vessels were deployed on the other coast of Malaysia. 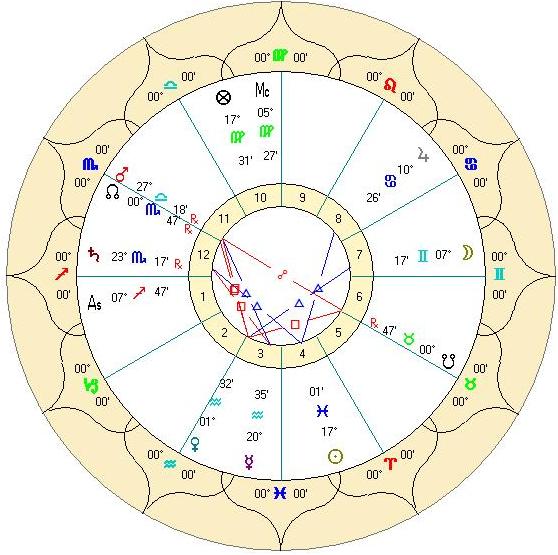 The charts is, at first glance, somewhat unremarkable.  An exalted Jupiter in Cancer is Lord of the Ascendant. In Hellenistic astrology, the Ascendant is considered as the bow of a ship, but the metaphor works for aeroplanes.

If this looks relatively benign, we need to look closer. Jupiter is the helmsman, but he make no actual contact or attachment to the Ascendant.  He is also out of Sect and in the house of Death. 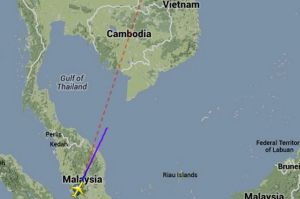 There is a fundamental conflict between Jupiter and Mars which would go unnoticed by modern astrologers. The two planets are in hard aspect to each other and Mars is in his Detriment in Libra and Retrograde. He is conflicted and therefore his Conjunction to the North Node only magnifies this.

Saturn also play a role here. He is in hard aspect to a saturnine Venus that would represent the co-pilot in this case. The Moon is separating from Venus, indicating a loss of light and communication.

The Lord of the Tenth and Part of Fortune is Mercury, who plays the role of Sail Master. This would not be particularly problematic if Mercury were not in the bounds of Mars, disposited by Saturn in Scorpio and with the Part of Nemesis.

It is intriguing to note also that Mercury is in the 25th Arabian Lunar Mansion Al Fargh al Thani. This is the “Second, or Lower Spout” of the Water-bucket. This Increases harvests, revenues, gain, heals infirmities, hinders building, upholds prisons, causes danger to seamen. Saturn is the ancient Lord of seafaring and ship wrecks. I don’t think it unreasonable to extend this to include flights over the ocean

I do not pretend to know exactly what happened to Flight MH370, but it does seem plain that the cause of system failure was dramatic and fiery. With the intensity of Sirius’ heat, the plane may well have exploded as the fishermen said it did. That would also explain the oil slick in that area of the China Sea