The tradition is clear that the potential visibility of an eclipse – that is to say whether one actually observes it or not –  is the area of influence.  If the eclipse cannot be seen in a given part of the world, then the ‘effect’ is not applicable. This eclipse is therefore of particular and primary interest as an augury for events in South America, but not elsewhere, except as a secondary of tertiary indication, involving other celestial and/or terrestrial events. For example, if we were considering an earthquake for the region, that event may well have further implications for other parts of the world. If there were to be a serious financial crisis, that too may affect other parts of the world.

According to tradition, every hour of a Solar eclipse is equal to one year of influence See for example Dorotheus of Sidon: Carmen Astrologicum. Trans. Umar al-Tabari Ed B.N. Dykes. p.62  Presumably, Dorotheus is referring to the period of the entire process of the eclipse, which in this case lasts for 3 and 1/3 hours, starting at sunrise over the Pacific Ocean and ending at sunset over the Atlantic Ocean, close to the west coast of Africa. However,  at any given point on the total eclipse path, the maximum duration for totality is just shy of 2 minutes and 10 seconds in duration.

Three and half years of influence is indeed considerable and we look to the chart for the maximum eclipse in San Carlos de Barchloche, Argentina. 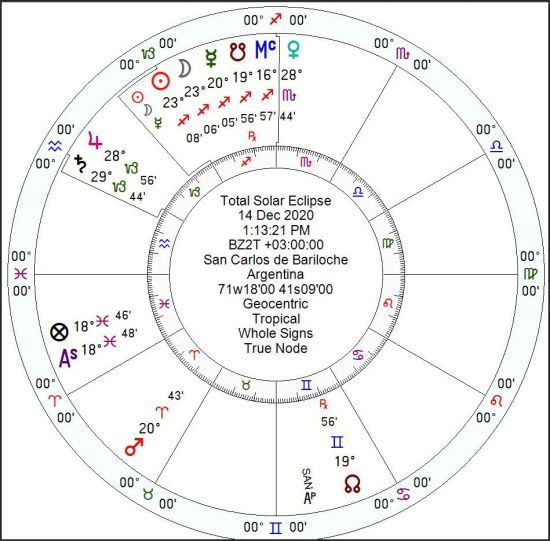 It is impossible to ignore the close and applying conjunction of Jupiter and Saturn, which will perfect on the boreal Winter Solstice and the Summer Solstice in the Southern Hemisphere.  Planetary Day ☽︎ Planetary Hour ♀︎ & Chart Almutem ♃︎.

Christopher Warnock writes of this Mansion: “It is a sign of enmity and anger, argument and conflict. It might literally signal that someone is being two-faced, saying one thing to us and doing another. If the question concerns the progress of an activity, this Mansion generally suggests a negative answer. This is the time to accept that the path we have travelled has reached its end. We are playing an end game. It is time to cut our losses.” See Lunarium.

This then is at the heart of the eclipse. Jupiter is in his House of Joy, but in his Detriment and conjunct Saturn in his own Domicile. The Moon, associated politically as the common people is eclipsing the Lord of the 6th House which is also associated with the common people, including servants. This may be one of those rare occasions when an ill wind actually does nobody any good. The Sun is further rendered weak due to the condition of Jupiter. Moreover, Jupiter’s sextile to the Part of Fortune is a weak and essentially ineffectual financial significator, particularly since the Moon squares the PF.

Mars is powerful, in Sect, in Domicile and Exalted in Capricorn, the sign of the current Conjunction. He is the Lord of the 2nd and 9th House – the purse and the judiciary. Venus in Scorpio. is Oriental and in her Detriment. This is Venus in warrior mode. She is however, with Toliman, listed as Bungula in Robson.  According to Ptolemy it is of the nature of Venus and Jupiter, which imparts beneficence, friends, refinement and a position of honor. [Robson*, p.148.] The 9th House informs the 10th, placing this robust and elegant Venus ‘close to the throne,’ as it were.

The President of Argentina, Alberto Fernández, came into office on 10 December 2019  and this eclipse occurs only a few days after his first year in office. Argentina is facing a plethora of serious problems. According to a recent report in the Financial Times (9 September 2020):

“Covid-19 is proving a mightier opponent than difficult political factions: Argentina’s ongoing lockdown, the longest and toughest in Latin America, has failed to prevent some of the highest daily deaths from coronavirus while dealing a blow to the economy. Argentina is suffering the worst of both worlds: according to the country’s industrial union, production at 63 per cent of companies has either fallen by more than half or ceased altogether.”

The financial situation in the region will continue to be dire and heightened social unrest is indicated. This is indeed a highly significant pivot and the changes occurring in Argentina and beyond are likely to be devastating to the current status quo, for good or ill.

The government of Alberto Fernández as indicated by the 10th House eclipse configuration is under extreme pressure and is unlikely to survive.